The forecast looked promising, and the Cape of Good Hope was behind us. It was difficult to get particularly worried about what might meet us in the South Atlantic, having just crossed a windy Indian Ocean and navigated the at times treacherous coast of South Africa. As soon as we were clear of Namibia, the trade winds filled in and pushed us gently along. The cold Benguela current flowing up along the coast made for frigid mornings, but we were soon out of it, and within five days I had gone from wearing a wool sweater to sweating in a t-shirt. 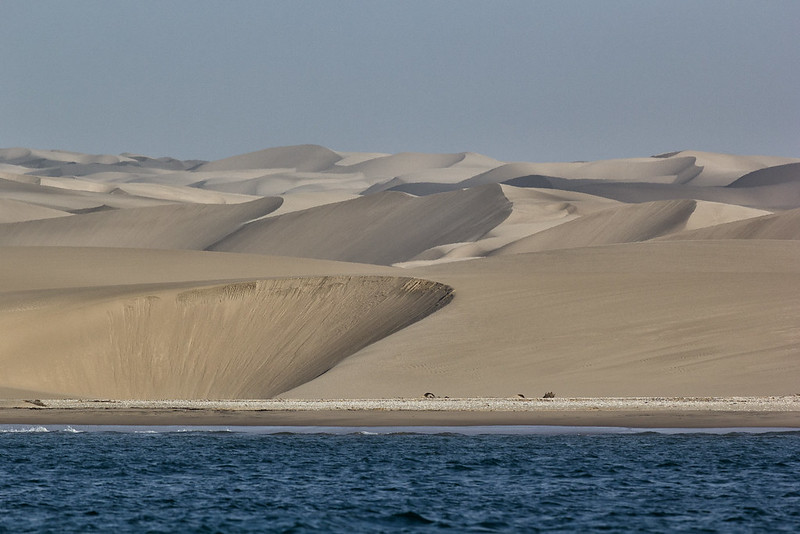 I was sorry to see the abundance of wildlife along the Namibian coast disappear as we ventured further out, but the blissfully easy conditions made it difficult to remain particularly sullen. We had 13-18 knots constantly from behind, carrying us calmly along an almost flat ocean. 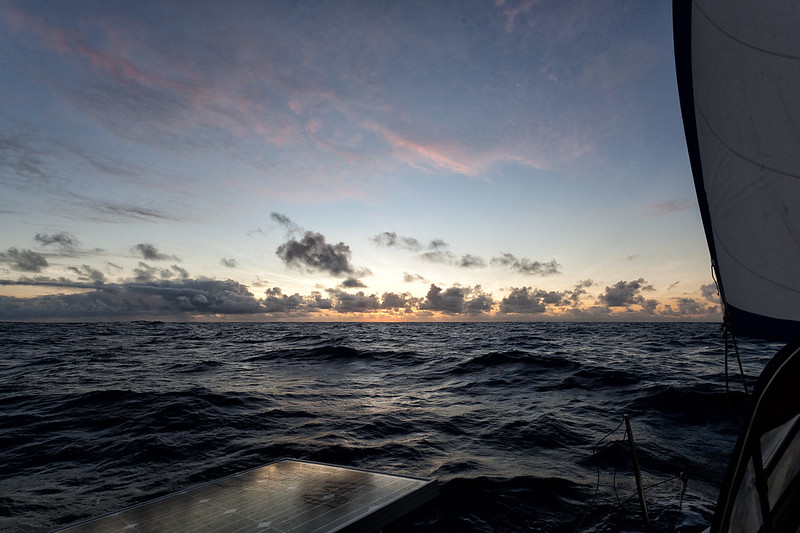 One afternoon, I noticed an odd sound, but quickly concluded that none of the usual suspects were causing an issue – our gas alarms were both okay, the occasionally squeaky inverter was off, and the chart plotter showed no warnings. After a little while, Michelle asked what the sound was, which finally got me off the couch and outside to have a look. A pilot whale was swimming less than an arm’s length from the boat, with another right beside it, and a large pod playing at a respectful distance. The sound we had heard while sitting inside was their whalesong. Listening to their haunting yet incomprehensible singing somehow felt like a poignant reminder of how very little we understand of what happens in this world. We may have satellite phones and Wikipedia, but the planet remains a deeply mysterious place.

A fish would occasionally be tempted by the lure we were trailing. Not much happens onboard while we are underway, and hooking a few fish provides us with an interesting diversion and a pleasant alternative to our usual diet of canned foods.

After 11 undramatic days at sea, St. Helena appeared on the horizon and we tied up to a mooring just outside Jamestown. St. Helena is primarily known as Napoleon’s prison. It’s far from anywhere and easily defensible, with steep cliffs and few good landing sites. These days, it’s a sleepy British outpost, with a couple of badly stocked grocery stores, a single bank and a few cafes. The tourist office seems to have far more employees than visitors, and the governor is chauffeured around in a conspicuous Jaguar with a crown in lieu of a license plate. We were told that the unemployment figure was 7 – not 7%, but seven souls, that somehow had manged to evade all government motivation and training programmes. 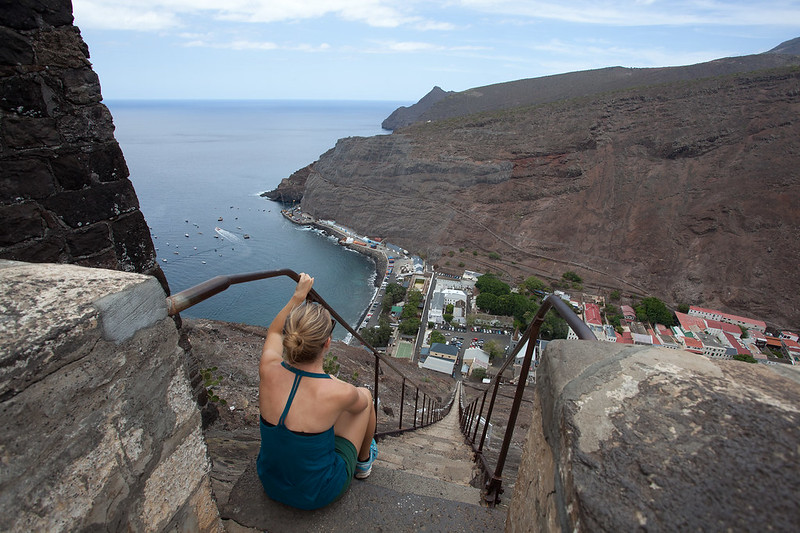 An airport has been built, but it has yet to become operational. So the island remains accessible only by sea. It’s an excellent place to retire to if you’d rather prefer it for the pace of life to come to a grinding halt. The mail will eventually get there, but it may not be this month. The island is nominally connected to the internet, but with the speed the rest of us had two decades ago. A cell phone network was introduced a year or two ago.

The best attractions of St. Helena can be found in the waters surrounding the island. We went diving into a cavern, with thousands of fish surrounding us as the light streamed in thorugh the narrow opening. Whalesharks regularly feed on the surface off the coast, and we got to swim with several of them. Their name, size and looks may instill fear, but these are curious and sociable giants. 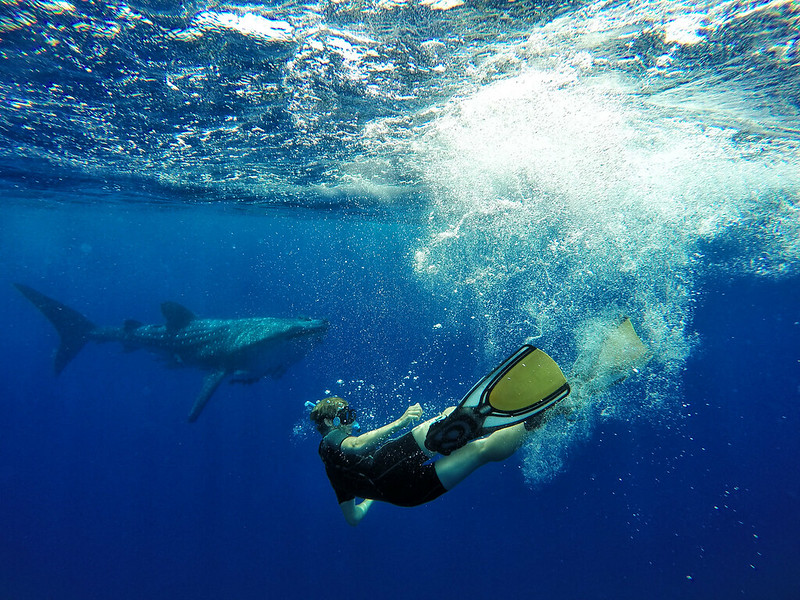 One of them in particular took a keen interest in me. I don’t like getting too close to wildlife of any sort, and swam slowly away to give it some distance as it approached. The whale shark followed every step I took by gently turning towards me. When it was no more than 3-4 metres away, I swam away rather rapidly, and the whaleshark seemingly got the message and remained in place, quietly gazing in my direction.

Having stocked up on what limited foods were on offer in the St. Helena shops, we set sail for another British colony, 700 miles further northwest. Ascension Island is a communications central in the middle of the South Atlantic, with antennas from the BBC, NASA and British and American armed forces dotted around the island.

Ascension was uninhabited until 1815, when the Royal Navy established a garisson to ensure the French could not use the island as the staging point for a rescue operation of Napoleon. A cannon was fired every hour to mark the passage of time, a painful reminder of how slowly time passed for the soldiers stationed there. These days, the stationed soldiers have internet connections, diving clubs, game fishing boats and more to keep them entertained, but life on an island of 700 people must still get pretty quiet at times. 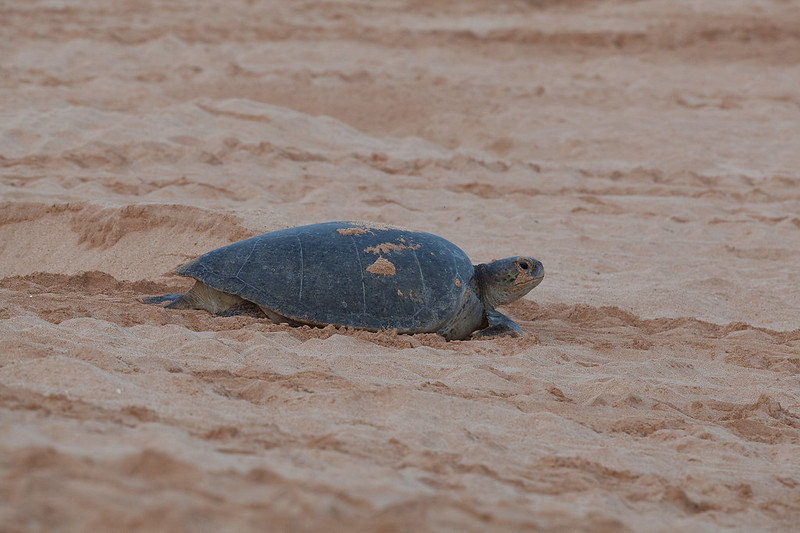 We were anchored outside a long beach – imaginatively enough named Long Beach – one of the most important nesting sites for the Green Turtle. The turtles swim from the coast of Brazil and back to mate and lay their eggs, a journey of several months. They go without food for the duration of this odyssey, another reminder of nature’s incomprehensibility. 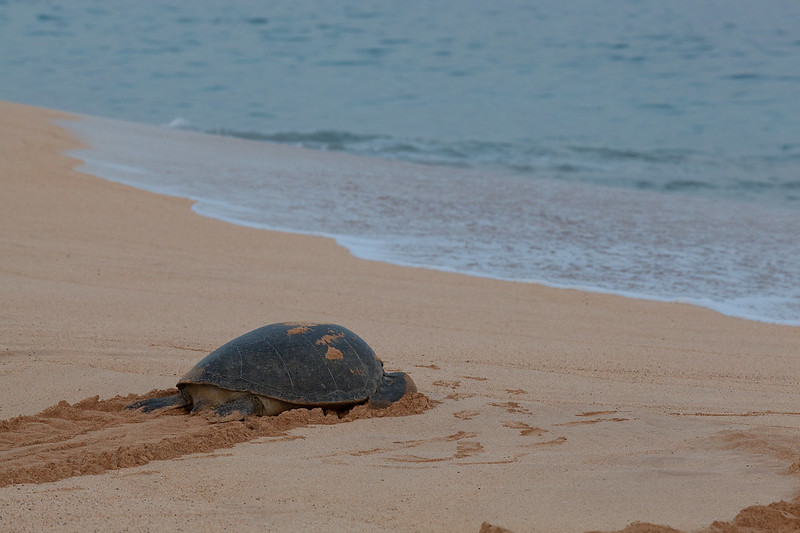 We went ashore early one morning to observe a female heading back to sea after laying her eggs. Every little step seemed to drain all her energy, but she somehow found the strength to drag herself one little step at a time closer to the ocean, until she quickly disappeared into the sea.

Our next planned stop after Ascension was Grenada, 3100 nautical miles away. Again, the passage was undramatic and unremarkable. At the end of it, we had done 18000 miles in 9 months. I enjoy life at sea, but eventually get to a point where I’d prefer a bit more activity in my life, and we were definitely feeling the strain of all those miles towards the end of the passage. 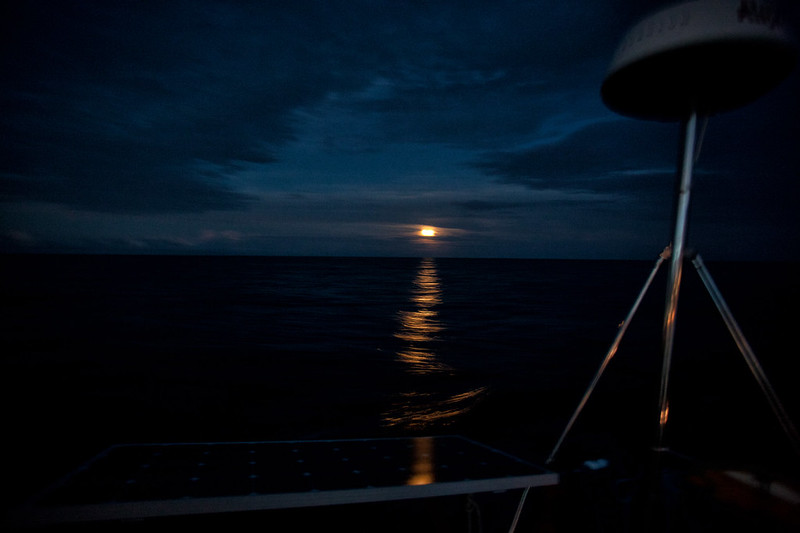 Just south of the equator, we were invaded by birds every night. Occasionally, a lone bird led astray quietly lands on the boat, getting some much needed rest before again heading towards shore. This crowd was rather different. Black, not particularly attractive birds would circle the boat, trying to scout out good landing positions. Our radar and the solar panel on our port side became their favourite spots, and several of them would fight for the best seats. To keep the bird shit and noise at bay, we tried to shoo them away, waving sticks in their direction – even shoving them off the boat with the stick – all to no avail. One night, they seemed to have brought along their entire extended families along with most of their other friends and acquaintances, and even with earplugs it was difficult to catch any sleep. I eventually figured out that repeatedly throwing buckets of water at them kept them away. A bird would approach the solar panel again and again, and each time I would fling a bucket just as it was about to land. After 8-10 tries, it would sulk a little and fly away. This didn’t keep the others from trying, but it did at least give me something to do on my night watches. 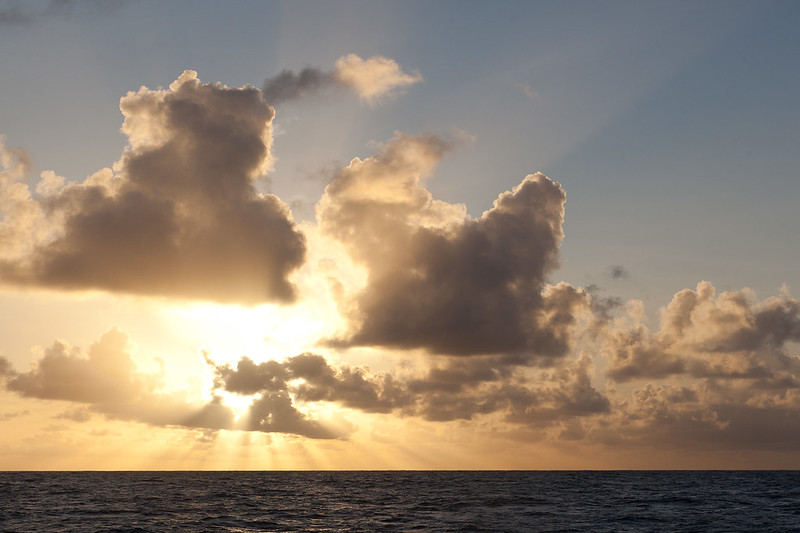 On the 27th day, Michelle shouted for me to come up, as several whales were approaching the boat. She had heard their blow before seeing them, and one of them was rapidly swimming towards us. These were large whales, perhaps 12 metres long or so – I prefer observing animals of this size at a bit of a distance, as they can cause quite a bit of damage if they accidentally hit our rudder or propeller. Our rudder was never in danger, but it did get uncomfortably close to the fishing line trailing behind us – I doubt if the whale would have noticed much, but our fishing rod would probably have given up on life rather quickly with a whale entangled in the line. 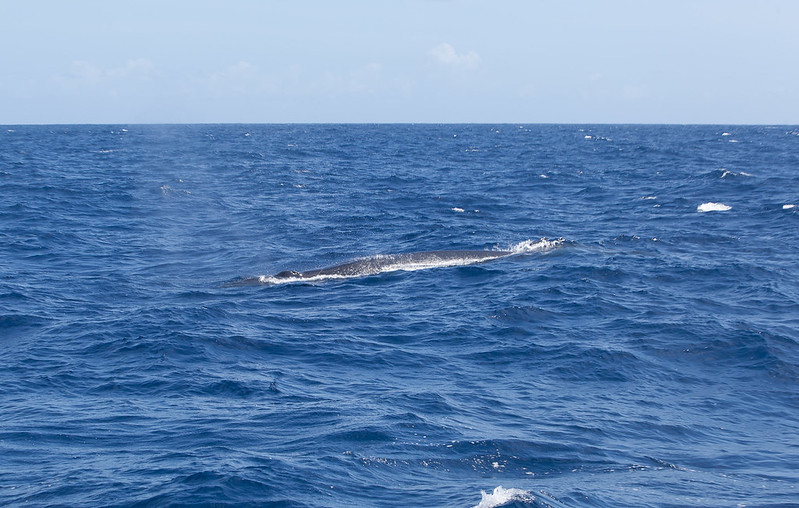 It took us exactly four weeks to reach Grenada. We crossed our wake from 2015 as the island appeared on the horizon, and had thus completed a circumnavigation. All that remains is getting home to Norway. It took 50 days of sailing to get from Cape Town to the Caribbean, but these were 50 relaxing and comfortable days, on a welcoming ocean that never showed a sign of anger. As grateful as I was for being able to step ashore and dig into an abundance of fresh fruit, it is difficult not to feel equally grateful for the simple and trouble-free life we had onboard while crossing this gentle ocean. 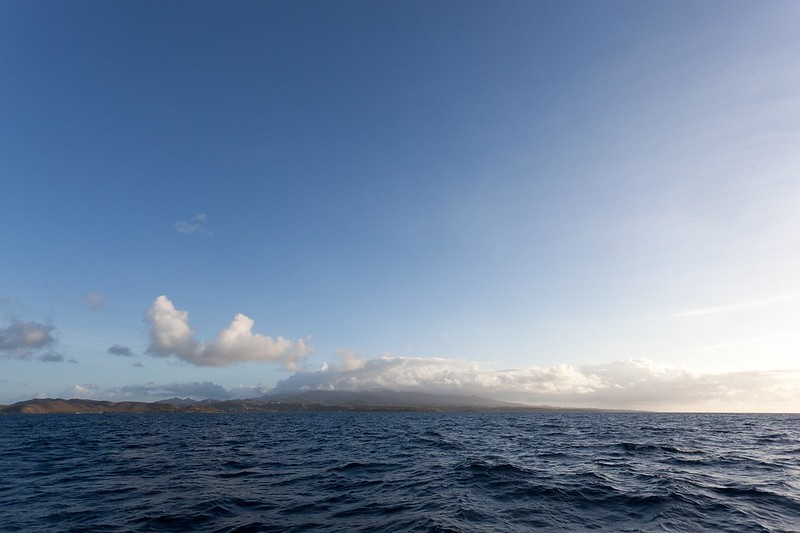