After lingering a little too long in Australia, our hull had an interesting collection of marine growth – the salt water crocodiles did not make it tempting to dive down to clean the hull – and by the time I’d scraped it off, much of our antifouling had disappeared in the process. I was getting tired of having to scrape the hull every couple of weeks, so we were tempted to do a quick haulout before crossing the South Atlantic.

I’d checked the price of hauling out in Richard’s Bay when we first arrived in South Africa, and was provided with a price list that can only be described as extortionary. I didn’t expect the situation to be any better closer to Cape Town where we are now, so figured I’d ask, be told a ridiculously high sum and leave it at that. It came as quite a surprise when much nicer facilities could be had for a fraction of the money, and a plan was starting to form.

We were hauled out on a Wednesday morning, on an oddly quiet day – the gusts howl through the marina most days, blowing seals off rocks. When the pressure washer finally got going, something was smelling faintly burnt. By the time we were done scraping barnacles from the hull, the air was full of ash, and giant clouds of smoke came drifting across the hill. A series of forest fires were raging – they are a regular occurence in the area, but news to me. The smoke was soon followed by visisble flames, closed roads and evacuated houses. A second fire started burning right above town, and three helicopters and 120 firefighters did what they could to keep Simon’s Town from drowning in flames. 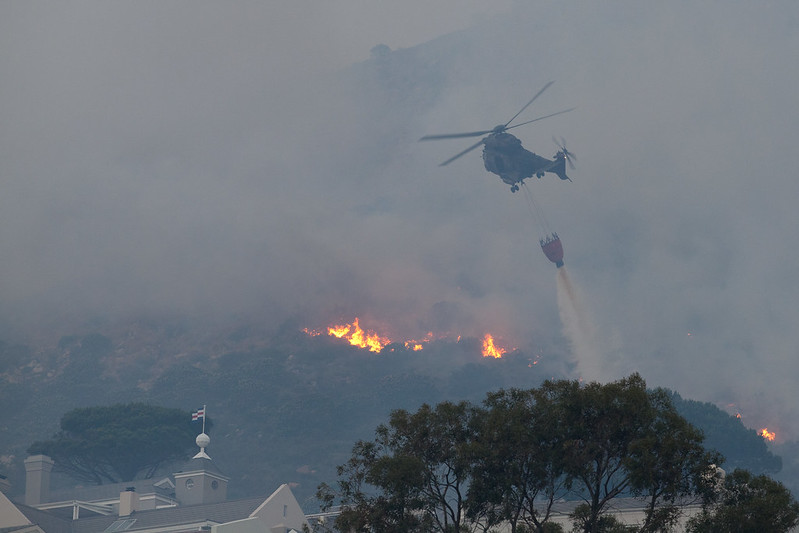 A forest fire isn’t generally particularly threatening for boats; if all else fails, you can always escape to sea – unless it happens to be the one time your boat is standing on solid ground. There are firegates on the edge of town, but the fire looked spookily close, and firefighting resources were stretched to their limits with 11 fires in the area. We packed essential and valuable items in a couple of bags in case conditions were to get serious. If nothing else, it was not wholly implausible that the smoke alone would eventually cause evacuation, and I wouldn’t want to leave our valuables exposed in what would temporarily be a ghost town. But the firefighting efforts did eventually get things under control, and as darkness fell the hills were strewn with embers on the decline. 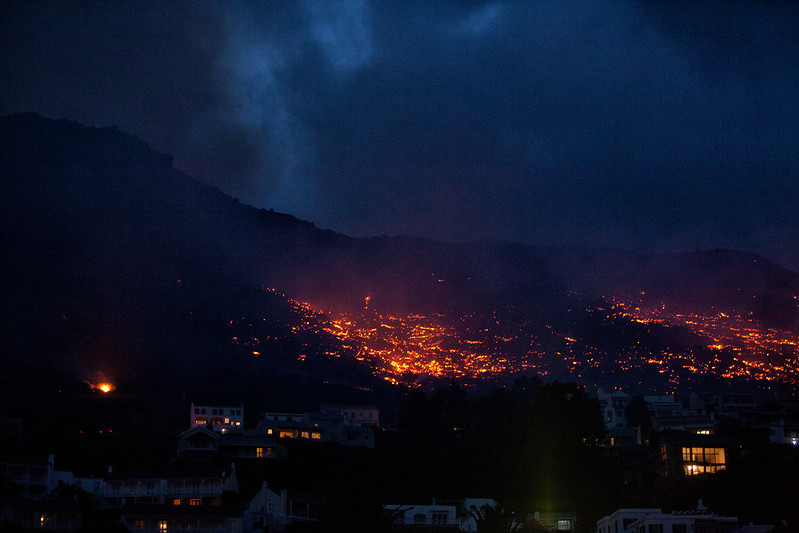 We got up early the following day, hoping to get most of the work done before sunset. Three coats of antifouling were rolled on, oxylic acid took care of some ugly rust stains, and I did a haphazard effort with some polish and rags. The propeller shines, our log has yet again joined the living. By the time my shoulders were about to fall off and the outer layer of skin on my thumbs had largely vanished, we were indeed almost done, and only had to deal with some minor details before we were lifted in again the following afternoon.